Often imitated but never duplicated!
Adams suction cups will not yellow, turn brittle or lose adhesion over time.
There's an art and science behind the world's best suction cups.
Adams USA have led the way in developing exclusive materials, moulds and processes that provide customers with what they want most - professional looking, reliable suction cups that perform better for longer. Please read our page about the company founder Bill Adams and Adams Suction Cups History.

Adams technical expertise is a big reason why they are the most skilled suction cup producer and world leaders in suction cup technology. Through years of R&D and testing, Adams have developed an in-depth understanding of the science and other variables involved with maximizing suction cup performance.
Superior features of Adams Suction Cups below 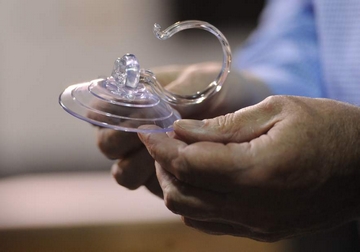 1. Safety in strong sunlight.
Adams patented light diffusing rings, stops a suction cup acting like a magnifying glass in sun light. Ordinary clear suctions cups concentrate light to a focal point which can damage interior surfaces behind the suction cup such as upholstery, curtains, car seats and dashboards.
All of Adams suction cups have light diffusing rings except the 22mm top pilot- which is used in the product 22mm with barbed tacks.

2. Holding power.
Due to thicker cross sections and superior finished molded surfaces, Adams suction cups are tested and rated to hold a weight that is based on the mm diameter of a suction cup with hook on glass*.

*A screw-in fitting, push in fitting or slot head may lower the holding weight of an attached product due to:-
1. it's reliance on the thread made in the PVC
2. the grip of the push in attachment within the cup
3. the closing jaws of a self closing cup.

Our Christmas range of suction cups range are now Phthalate-free.


What are Phthalates? pronounced "thah-lates."
Phthalates are chemical toxic additives that soften or increase the fluidity of a material (a plasticiser). The dominant applications are for plastics, especially Polyvinyl Chloride (PVC) which uses Di(2-ethylhexyl) phthalate (DEHP).
Phthalates are believed to be harmful to human health, causing damage to the reproductive system and increasing the risks of allergies, asthma and cancer.


6. Easy removal tab - Using fingernails underneath the cup will cause tiny scratches on the inside, through which air will flow and ultimately compromise the cup's suction ability. Adams tab removes the suction cup without damage to the cup or mounting surface. (On all sizes except some 22mm diameter).


8. Adams have brass nuts (not plastic) on their screw stud and nut range.


9. Adams strong hooks are "U shaped" for brush-past safety and not "V shaped" like many others.

Adams Mfg. Corp. USA is the world's largest producer of the world's best everyday
suction cups. They've made hundreds of millions (have they made a billion?) of them over the past 30 years.
Often imitated but never duplicated, no other suction cup on the planet delivers the holding power, crystal-clear clarity, unsurpassed safety or value of Adams "Made in USA" Suction Cups.


Suction Cup finish and odour.
Suction cups work best when the inner surface is perfectly smooth and without the tiny irregularities caused by large vinyl molecules evaporating off the surface. Those evaporating molecules can be sensed by smell. The quality of a suction cup therefore, is directly proportionate to how much the suction cup's odour is sensed.
Suction cups that "smell" are literally losing their ability to hold molecules as they leave the inner surface.

Adams suction cups are made of a proprietary blend of materials that keep them working better and longer than any other cup. A related issue is the appearance of the inner surface. Adams cups are shiny on the underside because any matt finish or insufficiently polished mold automatically means that air is going to leak in through the seal, causing cup failure. The laws of physics being what they are, any suction cup with less than a glossy finish on the underside, around the edge and extending into the cup, simply cannot stick as well.
By further adding a quick release tab, (as seen on most of Adams suction cups) this eliminates the damage to the cup edge caused by the "finger nail picking action" used to remove or re-position cheaper suction cups.

Adams suction cups v. Lever Type suction cups.
Adams cups of an equivalent size to "snap lock" type suction cups - hold better. Snap lock suction cups pre- load the cup with the snap device mechanism inside the cup, resulting in a greater pressure differential between the outside and underside which allows the air to migrate faster (the cup is continually trying to be pulled away from the applied surface). Adams suction cups lie flat against the fixing surface.